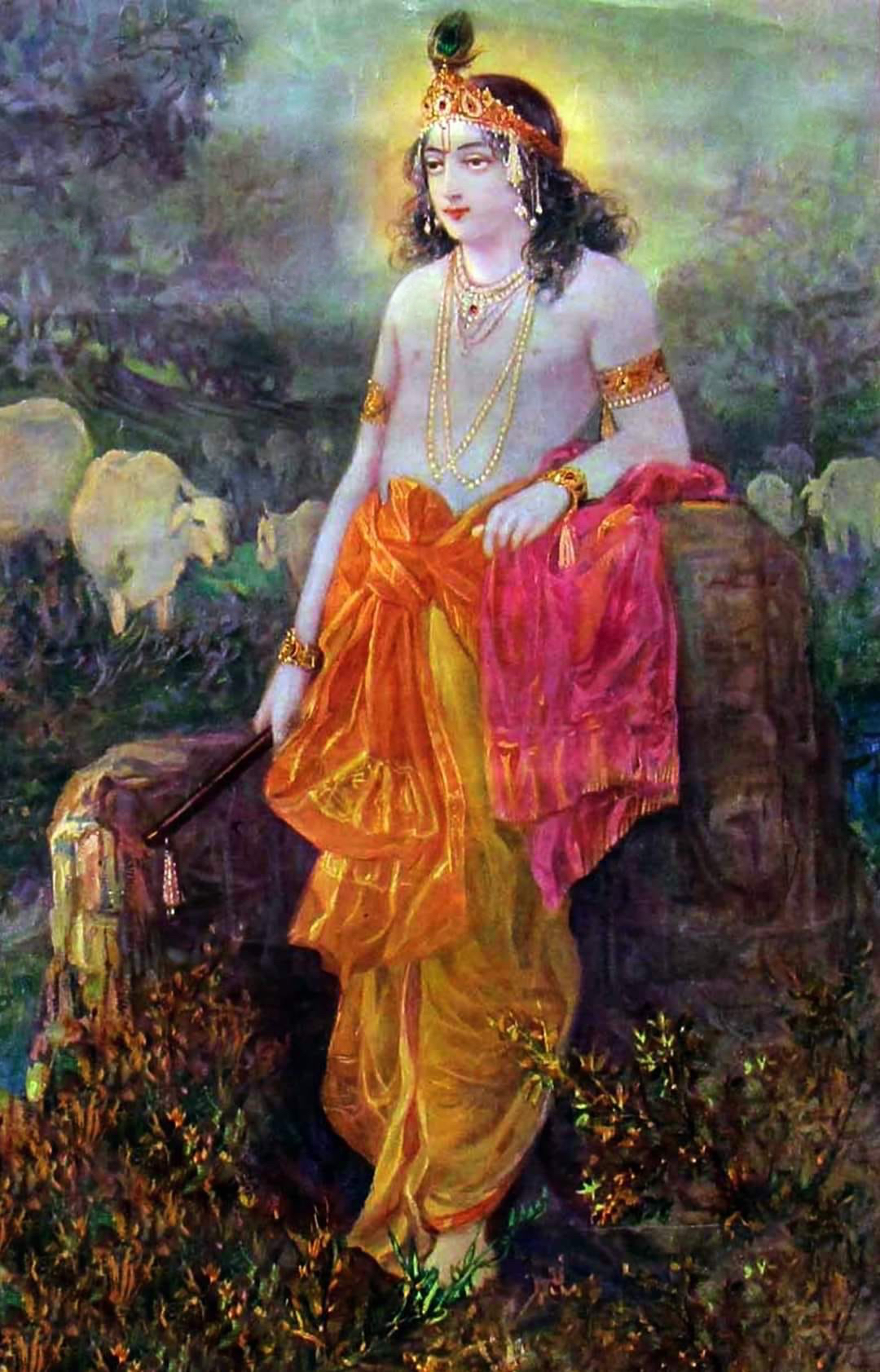 This book tells the story of the Lord and His incarnations since the earliest records of Vedic history, the history of the original culture of knowledge of India. It is verily the Krishna 'bible' [in Sanskrit called a samhitâ] of the Hindu universe. The Bhagavad Gîtâ relates to this book like the sermon on the mountain by Lord Jesus relates to the full Bible. It has about 18.000 verses contained in 335 chapters and consists of 12 subdivisions of books that are called Cantos. These books together tell the complete history of the Vedic culture and cover the essence of the classical collections of stories called the Purânas. This specific collection of Vedic stories is considered the most important one of all the great eighteen classical Purânas of India. It includes the cream of the Vedic knowledge compiled from all the Vedic literatures as also the story of the life of Lord Krishna in full (Canto 10). Lord Krishna constitutes a watershed in history between the old Vedic culture and the 'modern' political culture in which the rule of state no longer automatically is led by the spiritual order. The book tells the story of His birth, His youth, all  wonderful proofs of His divine nature and His superhuman feats of defeating all kinds of demons, up to the great Mahâbhârata war at Kurukshetra. In this war the Vedic culture fell down to be replaced by the fragmented religiosity we these days call Hinduism. This leading Purâna also called the 'perfect Purâna', is a brilliant story that has been brought to the West by S'rîla A.C. Bhaktivedânta Swami Prabhupâda, a Caitanya Vaishnava, a bhakti (devotional) monk of Lord Vishnu [the name for the transcendental form of Lord Krishna]. He undertook the daring task of enlightening the materialist westerners, the advanced philosophers and theologians, in order to help them to overcome the perils and loneliness of impersonalism and the philosophy of emptiness.

For the translation the author of this internet version has consulted the translations of C.L Goswami, M.A., Sâstrî (from the Gîtâ Press, Gorakhpur), the paramparâ [disciplic succession] version of S'rîla Vishvanâtha Cakravarti Thhâkura and the later version of this book by S'rîla A.C. Bhaktivedânta Swami Prabhupâda. The latter translators as âcâryas [guru teaching by example] of the age-old Indian Vaishnava tradition are representatives of a culture of reformation of the devotion for God or bhakti, the way it has been practiced in India since the 16th century. This reformation asserts that the false authority of the caste system and single dry book knowledge is to be rejected. S'rî Krishna Caitanya, also called Caitanya Mahâprabhu (1486-1534), the avatâra [an incarnation of the Lord] who heralded this reform, restored the original purpose of developing devotion unto the person of God and endeavored in particular for dissemination of the two main sacred scriptures expounding on that devotion in relation to Krishna as the Supreme Personality of Godhead. These scriptures are the Bhagavad Gîtâ and this Bhâgavata Purâna, that is also called the S'rîmad Bhâgavatam, from which all the Vaishnava âcâryas derived their wisdom for the purpose of instruction and the shaping of their devotion. The word for word translations as also the full text and commentaries of this book were studied within and without the Hare Krishna temples where the teaching of this culture takes place. The purpose of the translation is first of all to make this glorious text available to a wider audience over the Internet. Since the Bible, the Koran and numerous other holy texts are readily available, the translator meant that this book could not stay behind on the shelf of his own bookcase as a token of material possessiveness. When we started with this endeavor in the year 2000 there was no proper web presentation of this book. Knowledge not shared is knowledge lost, and certainly this type of knowledge, which stresses the yoga of non-possessiveness and devotion as one of its main values, could not be left out. The version of Swami Prabhupâda is very extensive covering some 2400 pages of plain fine printed text including his commentaries. And that were only the first ten Cantos. The remaining two Cantos were posthumously published by his pupils in the full of his spirit. I thus was faced with two daring challenges: one was to concatenate the text, or make a readable running narrative, of the book that had been dissected and commented to the single word, and the second challenge was to put it into a language that would befit the 21st century with all its modern and postmodern experience and digital progress of the present cultural order of the world, without losing anything of its original verses. Thus another verse to verse as-it-is translation came about in which Vishvanâtha's, Prabhupâda's and Sâstrî's words were pruned, retranslated and set to the understanding and realization of today. This realization in my case originated directly from the disciplic line of succession of the Vaishnava line of âcâryas as also from a realization of the total field of indian philosophy of enlightenment and yoga discipline, as was brought to the West by also non-Vaishnava gurus and maintained by their pupils. Therefore the author has to express his gratitude to all these great heroes who dared to face the adamantine of western philosophy with all its doubts, concreticism and skepticism. Especially the pupils of Prabhupâda, members of the renounced order (sannyâsîs) who instructed the author in the independence and maturity of the philosophy of the bhakti-yogis of Lord Caitanya need to be mentioned. I was already initiated in India by a non-Vaishnava guru and have been given the name of Swami Anand Aadhar ('teacher of the foundation of happiness'). That name the Krishna community converted into Anand Aadhar Prabhu ('master of the foundation of happiness') without further ceremonies of Vaishnava initiation (apart from a basic training). With the name Anand Aadhar I am a withdrawn devotee, a so-called vânaprashta, who does his devotional service independently in the silence and modesty of his local adaptations of the philosophy.

In most cases the word for word translations and grammatical directions of S'rîla A.C. Bhaktivedânta Swami Prabhupâda/ISKCON, Vishvanâtha Cakravarti Thhâkura and C.L. Goswami M.A., Sâstrî, have been followed as they were used in their translations and I have checked them with the help of the Monier-Williams Sanskrit Dictionary [see the file of the terms used]. In footnotes and between square brackets [ ] sometimes a little comment and extra info is given to accommodate the reader when the original text is drawing from a more experienced approach. On the internetsite bhagavata.org of this book, my - from ISKCON independent - version refers to the version of Prabhupâda that is linked up at each verse together with my own previous version so that it is possible to retrace at any moment what I have done with the text. This is in accordance with the scientific tradition of the Vaishnava community.

For the copyright on this translation the so-called Commons Attribution Noncommercial-Share Alike 3.0 Unported License has been chosen. This means that one is free to copy, distribute and alter the text on the condition of attribution (refer to the name of Anand Aadhar and to my website address bhagavata.org), that the resulting work can only be distributed under the same or similar license to this one and that one cannot use the text for commercial purposes. For all other usage one will have to contact the translator.

- See also a discussion of the structure of the Bhâgavatam.

- If you are interested in supporting this site please send a donation.

- There are several download formats of the full concatenated translation canto 1-12 of Anand Aadhar:
http://bhagavata.org/treasury/downloads.htm

- The full Prabhupâda version with purports and a Sanskrit database of the same translation is linked up at a each verse of this book and can be visited at: https://vedabase.io/en/library/sb/

We are grateful to the Filognostic Association of The Order of Time
for the production of this site and especially Sakhya Devî Dâsî
who helped proofreading and correcting the manuscript.

The graphics were provided by Argotique.
The Râdhâ-Krishna picture on the homepage is of Indra Sharma.
The image of Krishna on this Introduction page is probably an art work by Raja Ravi Varma.
The source of the rest of the pictures is mentioned at the bottom of each page.