or the science of realizing oneself God as the Fortunate One

Reading S'rîmad Bhâgavatam one may wonder how Vyâsadeva has arrived at the order of this book. The Sanskrit text itself offers us no titles for the cantos, but the tradition does. So how has one concluded to these  titles? The book itself gives us some clues to this. First of all  Vyâsa in 1.2: 11 describes how the unity of undivided knowledge is known by a threefold discipline, or trisâdhana, specified as the science of God concerning the aspects of the Absolute, the brahman, the Greater Soul, the paramâtmâ, and the person of all bhâga, viz. excellence, fortune and majesty, or Bhagavân. Another way to describe these three different disciplines in one breath is to say that in freedom from illusion with the Spirit of the Absolute, one, as a soul relating to the Supersoul in analysis connecting with the regulative principles, has to arrive at the Fortunate One to be there with Him of service as a person of God. So the basic logic followed in this text of step by step attaining to love of Godhead is known as the art and science of arriving at the personal of God departing from the impersonal of the Absolute Truth. Even though the Absolute truth is of a nondual  nature and, in relation to the Supreme Soul, a matter of local culture shipping with duality, the conflict of the dual versus the nondual of realization is solved in the personal of considering the object of worship religiously and the explanations of the teaching in the politics of spreading the message.

So, despite of the nondual nature of the Absolute, it is the mission to face the duality of the material world with the help of the person of God who is there as the teacher and the friend. This duality is traditionally in India defended with the different darshanas, or the different perspectives of indian philosophy. The threefold of the discipline combined with the duality that has to be faced, results in these darshanas. Thus the discipline with the Absolute Truth is known by method, nyâya, and non-illusion, vais'eshika, by setting up the argument concerning the time and the person properly in cantos one and two and then facing the facts of the manifestation of the form and norm of God in cantos three and four. Next one is confronted with the duality of matter and soul when faces the reality of the material diversity at the one hand and the need to stay connected in rising above it in transcendence on the other.  Thus we see the sâmkhya and the yoga appear in the line of the argument of this purâna, of these classical stories that help us to realize the Vedic wisdom. Even though Lord Kapila, the avatâra of the analytical approach, was introduced already in the third canto as part of the science of arriving at non-illusion about the Absolute, we get to see the full scope of it's effect in the fifth and sixth canto. Therein is presented the diversity of the person and the universe in relation to the Supersoul. Connecting in yoga therewith one faces the form and the norm of it in the cantos seven and eight where we learn about avatâra Nrisimha and the culture of bhakti together with the founding fathers of the traditions defending that culture of the enlightened souls the way they take responsibility in the different eras of creation. For the realization of the personal we finally enter the discipline of considering the object of worship, called mîmâmsâ, the great example known as the Time or kâla on the one hand and the substance of the person or the purusha on the other hand. This is seen in the ninth and the tenth canto presenting us the persons found of the dynasties of  the Vedic culture in relation to the sun and the moon on the one hand and the person as the object of worship in the form of Lord Râma and Lord Krishna on the other hand. With Krishna we find the culmination of the discipline of oneness in diversity in one person, the Person of All Qualities and Fortune. In the last part, the vedanta, or the final commentary is presented. In canto eleven this is done in the form of the teachings to be remembered after Krishna left this world and the norm of celibacy in facing the Age of Quarrel is set by sage Mârkandeya in canto twelve, in which the people have difficulty keeping track with classical wisdom in arguing endlessly about their personal weaknesses in politics and in a societal confusion of identity. So we have at this second level, when we accept the duality with the threefold respected nondual reality of the Absolute Truth, the sixfold division of the darshanas that cover all the different aspects of indian philosophy.

The next realization at an even deeper level of order is most confounding: there seem to different types of logic woven into the story. This logic presents us with an almost chaotic array of stories relating to the time of the material universe, the person who is of or against God, the manifestation of the Lord in different forms and the reality of the religion that by tradition is needed to remember God. A doubter failing in the method may be confused about the purpose of the vedic discipline presented by Vyâsadeva. Is it all about becoming religious? Or is it to figure out who the Fortunate One actually is? Is it to sober up with the difficulties of mâyâ, the bewildering potency of the material universe with its operating modes or gunas to the eternal of Time, or is it all about defeating demons, the asuras and râkshasas, to be a pious person? To what purpose is the bhâgavata purâna there? Vyâsa is not so explicit in this at a meta-level. He simply presents us the consequence of his logic. He reasons about avatâra, purusha, kâla as well as about dharma in a pleasant intuitive mix surprising us at every page. The general outline of his logic seems to be that departing from a certain historical respect of time, the person manifest in the universe as also the person of God in the form of the universe must be realized, after which the need for the hero of God, the manifestation of the Supreme Personality of Godhead, comes in view, for He is the One to lead the bewildered living beings back to His purpose: the dharma which then is delivered as the conclusion of the mission for all the three disciplines. So, in one breath said,  the time realized as a person places us for the need of the hero, of the incarnation of the Great Example, to be certain on the path of our religiosity of finding liberation with our enlightenment in spiritual self-realization. So we with this line of argument have a fourfold cause to reason from which is something we in the West more or less already knew from Aristotele; this causal network is the kâranata, the causality of the Bhâgavatam. From this kâranata we see the sixfold of the different visions further divided in twelve;  we see the argument further diversified to the basic logic about self-realization. This twelvefold effect of the logic followed thus is laid down in the twelve books, or the divisions of the three hundred thirty-five chapters in this bible or collection of stories, or samhitâ, about the wisdom of God. Thus we get the contents, the anukrama of this book arranged chapter by chapter. The final result of realizing this structure, this vyûha of the bhâgavata, is in the table below presented as a permutation on the concepts of the pratyaya or the proof thus delivered. Time as the doer results in the proof of history. The substance of the universe and the logic followed is proven to be the person. The hero of the Lord incarnate in a certain form is the manifestation of that proof of the person of God and the religiousness of the norm set by Him is the proven duty we have to conclude to. Thus reasoning from the causal modes of history, person, manifestation and the duty we arrive at the result, the bhâvita, of the structural awareness of the Bhâgavatam as laid down in the before last row of the table below.

The final step in this in depth analysis of the structure of this book is the translation of this result, this bhâvita, into the actual titles the paramparâ came up with. In this respect another element is added to the story: the element of the different subjects discussed in the book. In 2.10: 1-2  S'ukadeva Gosvâmî as the first philosopher-king after Krishna, the first mahârâja-âcârya explains that: 'In this [book, the S'rîmad Bhâgavatam] are discussed the following [ten] subjects: primary creation [sarga], how the interactions of life and the lifeless came about [visarga], the planetary order [sthâna], the maintenance of belief [poshana], the impetus for action [ûtaya], the administrative eras [manvantaras], stories about the Lord His appearances [îs'a-anukathâ], returning to God [nirodha], liberation in devotional service [mukti] and the summum bonum [the life of Krishna, âs'raya].  The great sages reduce the purpose of [the first nine] characteristics of this [Bhâgavatam] to the clarification of the summum bonum. This they deduced from either the words themselves used in the text or from their purport.' In 12.7: 9-11 he further dilates on this saying: 'The creation [of this universe, sarga], the subsequent creation [of different worlds and beings, visarga], the maintenance [the sustenance, the vritti or sthâna] and protection [the rakshâ or poshana of the living beings], the reigns [of the various Manus], the dynasties [vams'as], the narrations about them [vams'a-anucaritam], the annihilation [of different kinds, pralaya or samsthâ], the motivation [of individuality or hetu] and the supreme shelter [of the Fortunate One or apâs'raya], o brahmin, are the ten characteristic topics of a purâna as understood by the authorities on the matter; some state that relative to the greater ones, the lesser purânas deal with five'. These verses inspired the paramparâ, the disciplic succession in the person of Swami Prabhupâda to present the book with the titles given in the last row of the table below. In fact in his argument that what is laid out above  is more or less intuitively combined with these ten topics. The titles mustn't be seen as direct translations of these ten topics though, since they are diffusely discussed throughout the work. S'rîla Jîva Gosvâmî explicitly reminds us of the fact that 'one should not try to assign each of the ten topics to a particular canto. Nor should the S'rîmad-Bhâgavatam be artificially interpreted to show that it deals with the topics successively.' The titles assigned by the paramparâ just remind one of the ten subjects as far as a certain emphasis is made by a certain canto or kânda. The actual in depth structure is realized by the full scope of the table below summarizing this discussion. 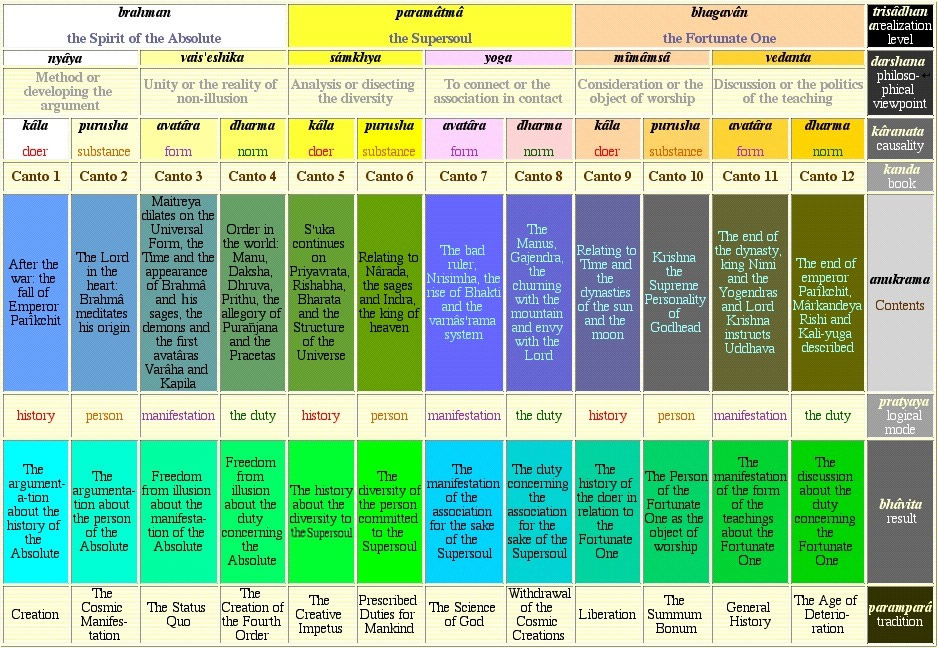